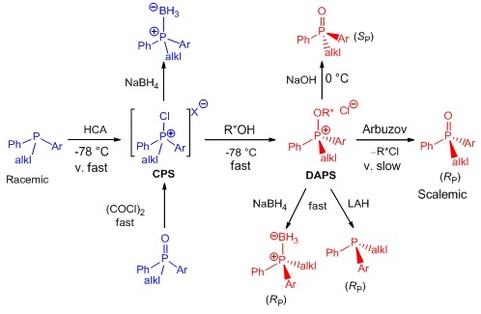 Overview of Novel Organophosphorus Methodologies
Dynamic resolution of P-Stereogenic phosphorus compounds. This unprecedented reaction enables easy construction of P-stereogenic phosphorus compounds (incl. phosphoramidites). It was run at kg scale and commercialized. It is based on an asymmetric version of the Appel conditions – I chose to look at this old reaction from the point of view of the unwanted by-product and realised that we could take advantage of its high selectivity to make much more desirable end-products. From initial promising results (publication P1) the project has matured to be a powerful and flexible method for the construction of a wide range of chiral phosphorus compounds (publication P2), which was patented (PCT/IB2005/002079 granted) and licensed for commercialization to Celtic Catalysts (our Campus Company set up for that purpose). We found interesting mechanisms and intermediates (Chem Commun, 2012, 48, 10040) and discovered fundamental insights into the rates of nucleophilic substitution at phosphonium centres notably: pentavalent transition states vs. pentavalent intermediates (Publication P3).

There are two entirely different uses for the compounds: as catalysts and as ProTide drug candidates. The latter have emerged recently as a powerful hepatitis C treatment.

·   At MIT: I found a significant improvement in the Sharpless asymmetric dihydroxylation (AD) reaction - patent recognition was granted for this contribution and still generates royalty income. I am honoured to note that this work formed a part of the body of work for which Sharpless won the 2001 Nobel Prize and gratified that he mentioned this in his Nobel Prize address.

·   At UCD: chromium salen catalysed asymmetric alkene epoxidation. With over 90% ee for trans-epoxides from E-alkenes, this method is complementary to Jacobsen-Katsuki epoxidation but, uniquely, utilizes a different salen substitution pattern - bis (3-trifluoromethyl): (Org. Lett. 2001, 3, 663, 3435) and ours is still the definitive review of metal-salen catalysis: (McGarrigle & Gilheany, Chem. Rev. 2005, 105, 1563).

·   I gave coherent theoretical descriptions of P=C/P=O and hypervalent phosphorus bonds in my influential review (Chem. Rev. 1994, 94, 1339) and am especially known for the final debunking of virtual d orbital involvement and for the use of Walsh diagrams.